On the Fitworldexposed website we talk a lot about how to gain size and strength. More specifically, we talk a lot about the importance of having big and strong glutes for an impressive lower body and powerlifters are hands-down the athletes out there with the biggest and strongest glutes as far as I’m concerned because their sport revolves around Squats and Deadlifts. Although one thing that I haven’t discussed too much with powerlifters who came on this site was the lonely bench press. A lot of people focus a lot on their squats and deadlifts more because it will get them a bigger total, but that doesn’t mean that the bench press has to be a half-time show, give the bench press the love it deserves!

Today I had the opportunity to talk to a world record bencher for his weight class who goes by the name of Jeremy Hoornstra. He used to be a professional bodybuilder, but now he is a bench press specialist and it is an honor to have him on this site because he can give some golden tips on how he trains the bench.

Heck, even if your goal is to build a bigger overhead press you could still learn a lot of benching tips in this article because raising your closegrip bench will have a high carryover to your tricep strength which will in turn affect your OHP in a good way.

This is why if you want to get good at anything then you have to learn from the best because they didn’t make it to the top by accident.

Powerlifters have dedicated their lives to getting stronger totals and the wisdom/knowledge that they have is worth its weight in gold. Although I must add that Jeremy is a bench press specialist and he did focus a lot on this particular lift so he really is the go-to guy for building up your bench. 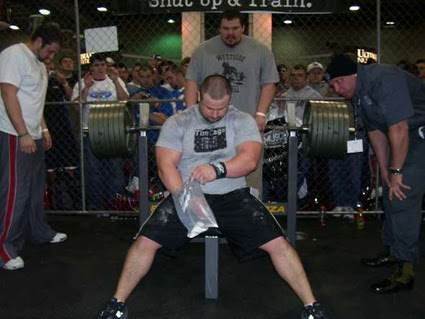 What made you want to go from bodybuilding to powerlifting? Also what is it about the bench press that you like so much?

I was actually training for a bodybuilding show and hadn’t really been exposed a whole lot to powerlifting.  All I had seen was the big 400 lb guys with the hot dogs on the back of their heads and didn’t really want to look like that.  So, in working out, I had a guy that competed in powerlifting tell me that I had just done a double with the world record for that weight class and shortly after that, did my first show.  Immediately calls came in and invites to shows, sponsorships, etc and pretty much set the path for the way I felt I should proceed.

What I like about the bench is I happen to be one of those guys who benches a little more…therefore, when the average guy who asks the question that determines if you’re big or not “what do you bench?”  Mine is a little more impressive.  However, he will always have a cousin that did more once.

In all seriousness, I have been benching since middle school, I have developed myself to a better build for it and used what I’m genetically better suited for to perfect my form on it.  With the bench, my opinion is it is the most technical of the three lifts and the importance of all the muscle groups involved from head to toe is vital to getting the most you can out of a bench press.

What does your warm-up look like before even touching the bar (ex: Band pullaparts, band dislocations..etc) and also do you do any direct rotator cuff work?

My warm-up before the bar involves carrying my gym bag to the bench…jk.  I really just warm-up on the bench, very explosive reps with 135, as fast as possible warming up fast twitch and working on speed as it’s very important as well, but slow and steady as I progress up in weight.  I usually work heavy sets on bench, I break it down to specific parts of the movement, then accessory movements and will usually end with scapular or shoulder work. 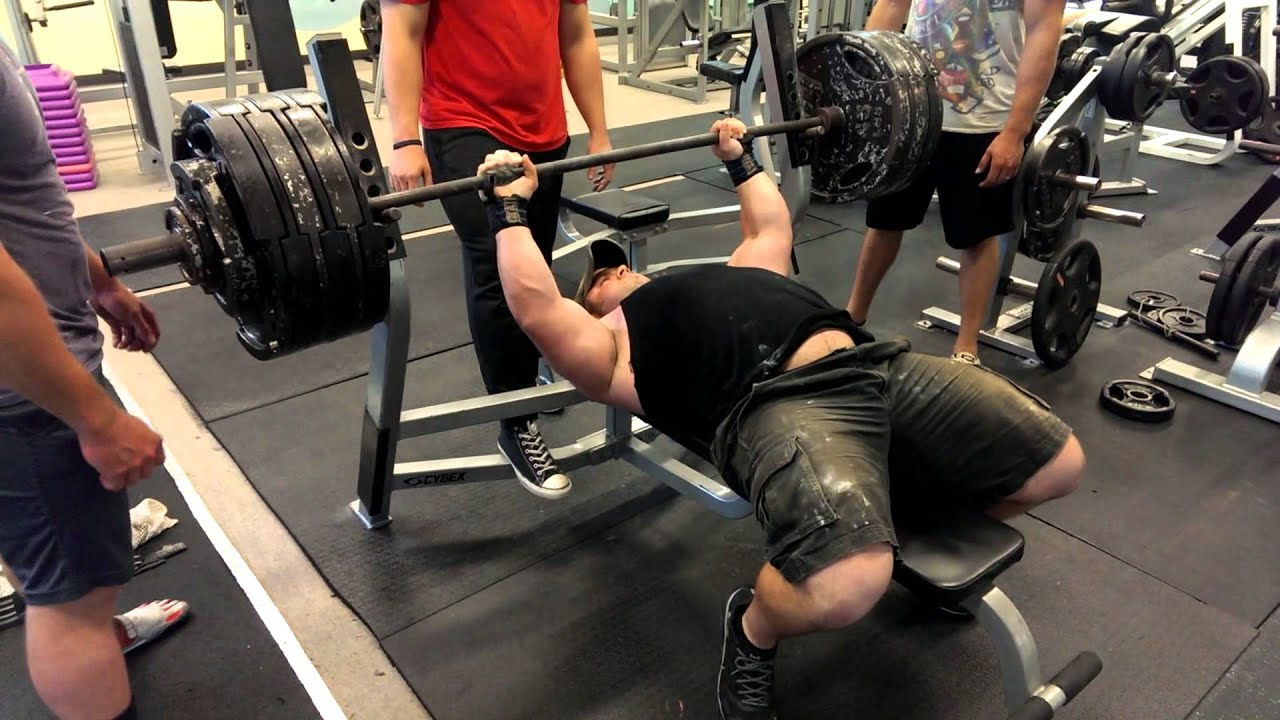 What are some tips for beginner lifters on how to PROPERLY retract the scapula for benching?

When I set up, I try to pull my hips slightly back (as I’m by far not known for arching rather very flat backed) and shoulders down towards them as well.  Then I try to squeeze my shoulder blades back and almost pinch the bench with them.  Once they are as far back as possible, I flex my lats really hard and grip the bar.

How do you engage your lats in the bench press as much as possible?

Lat engagement depends on person to person, but for me, flexing beforehand helps, also tucking the elbows in immediately after the press begins and driving up towards the face from sternum area.  Also, trying to “pull” the bar apart on the press helps engage as well and if I feel I’m not using them adequately, I try to think of it that way.

How important were dips for helping your bench press out and why?

Dips are very import.  You are only as strong as your weakest link which tends to be the lockout and for a few reasons.  It’s the end..you’re tired, it’s heavy, etc.  Also, people tend to focus on chest for bench when it’s pretty evenly split amongst a few muscle groups at different times.  If you aren’t really hitting triceps, you can explode off your chest all you want, but until you lock it out, you didn’t bench it.  Dips and specifically weighted dips are great at lockout power and really focusing on the triceps.

How many vertical pressing variations do you include in your program on average for trying to build your bench?

I do a few, I used to do more which included log press for strongman but after hurting my bicep numerous times on standing strict pushpresses, I quit those as well.  So, Z presses, single arm landmine presses, and seated military presses to both the front and back of head are pretty much it as there’s not usually heavy enough dumbbells for me to use for pressing. 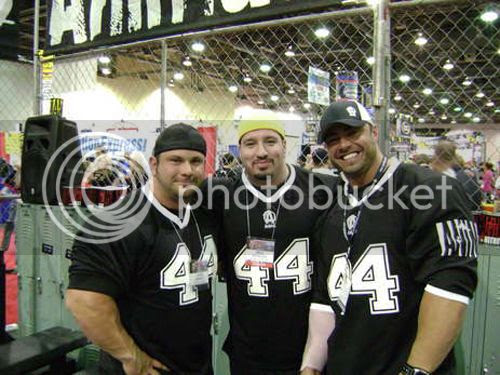 What are your 3 favorite direct tricep exercises for building your bench?

Weighted dips, single arm overhead tricep extensions, and nosebreakers.  All very good and work all three heads of the triceps.

Having strong rear delts is important for healthy shoulders, what do you like to do for your rear delts?

I do a lot of delt work and they’re usually pre-exhausted by the time I get to them but rear bentover fly’s are good, lots of variations of rows hit them, as well as hang cleans hitting them indirectly.

What are 3 of your favorite exercises for building the bottom of your bench press?

Deadpresses by far outweighs all of them.  After that, Speed sets specifically with bands and also wide grip pause work.

What are your 3 favorite exercises for building your bench press lockout? Also what is your take on doing partial pin press benching to help build your lockout strength?

Lockout I like to work on the tricep exercises I already mentioned as well as closegrip bench with a 2 second pause at the top of each, band pressdowns for excessive rep ranges (endurance), and iso static holds usually superset with closegrip bench.

Partial movements are good, specifically if it’s working an area you’re lagging in.  When I train, obviously the more you do the better you get and the heavier you go, the more accustomed to the heavier weight you’ll become, but a very important factor is finding where your stickpoint is and working on either that part or the part just before it, example if your stickpoint is 2 inches off your chest, working on speed off your chest will give you the momentum to fly through that hard part.  Obviously working on that specific area is crucial but if you can help it out a little by strengthening the speed prior, you’re better off on both aspects. 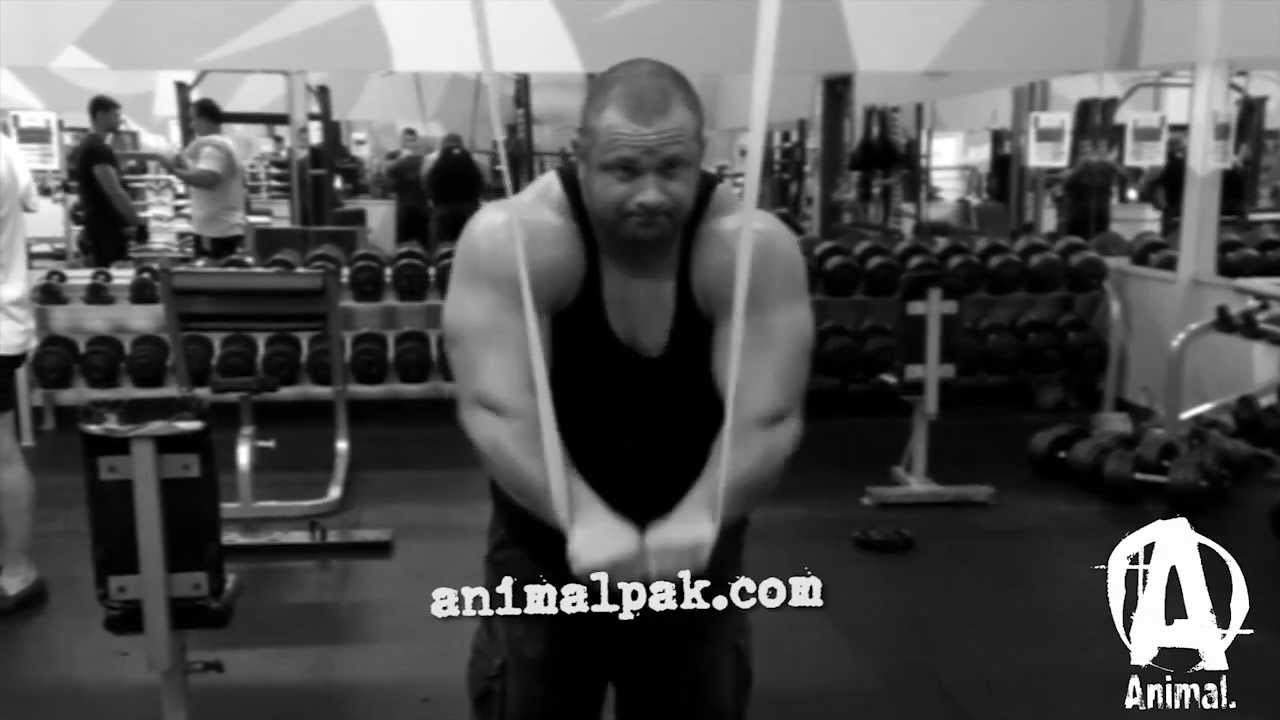 I see that you incorporate seal rows in your program, why use this rowing variation and why does it have good carryover to your bench press?

Seal rows are like concentration curls for the row.  There’s no cheating, it’s strictly lat and back work and a big bench requires a big back.  It’s the foundation of your press and if it isn’t strong enough to stay tight and hold everything where it needs to be, you will not be a good presser.

Where do you press the bar to when you bench press and why? (ex: lower chest)

I go to lower chest, that is where I utilize the most muscle groups possible, such as the lats and chest off the bottom, the the backwards drift of the bar toward the head engages the delts and then the the triceps kick in.  It’s important to use all of the muscle groups, and the most of them you use at the same time will yield the most results. 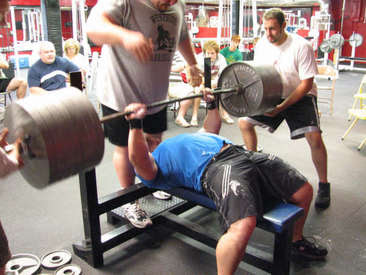 When do you think that a lifter should use bands in his/her training? (Ex: after 315lbx5)

I think that bands should be used (and cycled as they’re very taxing and need to be rotated in/out of workout programs) after the main working set or possible the set after.  Too late in the workout and you’ll be too spent to really get what you can out of it.  You need to be insanely warmed up, but also fresh enough to have the speed and power still to bang out the reps with them.

Whats your favorite lift outside of the bench press that you would be doing if the bench didn’t exist?

I like overhead lifts but probably squats as I’m actually quite a bit stronger at those than bench.  Just proportionately, my bench is higher than normal.

Where do you see yourself in the next 5 years with lifting and what do you want your legacy to be?

Thank you for your time! If you want to see more of Jeremy then you could check him out at: